All right, I apologize that I have been a very naughty girl. I haven't posted in a while! I have been working on numerous projects, but I wanted to show you some cool 4th of July things before it rolls around!

Every year, my cousins host a 4th of July party, and it is awesome. They do food, fireworks, and it's great company. This year they even had a band! Everyone is asked to bring a dish to pass, so this year I decided to do something cutesy and 4th of July themed. The original idea is from here. I did mine a little differently, because of the layering of the fruits. 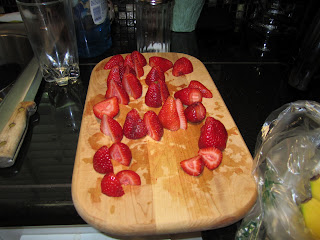 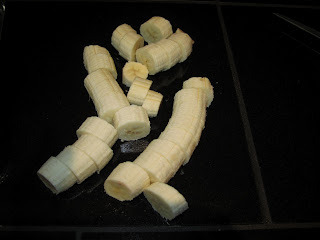 3. Make 2 kabobs entirely full of strawberry halves. Make 2 more kabobs entirely full of banana pieces. Alternate them in the pan, like the stripes on the American flag. I realized I had to do the flag this way because had I did the layers with alternating fruits like the original idea, and realized my flag would have been really short since the stripes would be going vertically, not horizontally.

5. Now line up the skewers, with the blueberry ones first, followed by the strawberry banana ones. Instant American flag! Display on a serving tray. 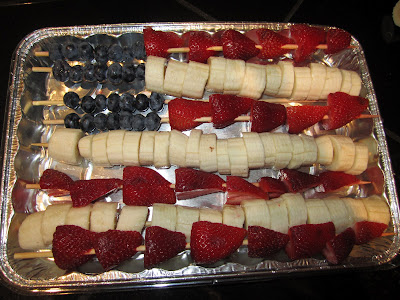 A couple of notes:

*Brush a little bit of pineapple juice over the banana pieces to keep them from browning if they will be out on display for a while.

*So, overall, this was a cute idea that people talked about and complimented at the party, and I am not disappointed with how it turned out, but I think next time I will trim the skewers in half and layer them the opposite way (vertically), so that they will feed more than 8 people. Also, those banana skewers are a LOT of banana. Nobody touched them at the party (and I don't blame them in the least!) Maybe I need to use marshmallows next time.

*I also made my famous taco dip, which you can also make very easily!
Posted by Shelly at 5:52 AM