How many times in your life have you heard this? It's an incomplete cliché. If it fits then...what? You don't have to return it? You won't get plantar fascitis?

From espadrilles to wedges, stilettos to mules, flats to mary janes, there are so many different types of shoes out there. I am going to take you back through some footwear history and style. In the spirit of the theme, here is a really terrible slash hilarious video all about shoes.

Also, taking a trip back to childhood, here is the ever-popular English nursery rhyme:

There was an old woman who lived in a shoe,
She had so many children, she didn't know what to do;
She gave them some broth without any bread,
Then whipped them all soundly and put them to bed.

Yikes. Kinda scary...I am really glad that wasn't my mom. If I could re-write that without the child abuse and still involve shoes, my version would go:

There was a young woman who loved her a shoe,
She had so many pairs she didn't know what to do,
She stashed them wherever she could find that was nice,
And she never actually wore the same pair twice.

There are actually lots of good shoe stories out there. The Wizard of Oz, Cinderella, the Elves and the Shoemaker...

Now, one should be fully aware that there is an imposter piece of plastic that is trying to pose as footwear. It's sweeping the nation, sucking people in over its comfort vs. fashion factor, and Tim Gunn even deemed it a plastic hoof in this interview (jump ahead to 2:12). The monster has even stooped so low as to have separately sold decorations (jibbitz) with it to distract others from its hideous appearance. Otherwise known as the Croc, it is the most loathed loafer in the land by the fashion industry. How do I know so much about Crocs, you ask? It's simple. Know thine enemy. 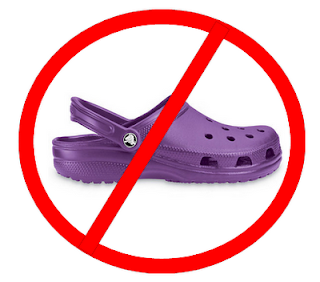 "I like your Crocs," said nobody...ever. Or, if they really did say that, they probably were desperate to make conversation and they lied to you). Anyways, I digress. Getting back to REAL footwear:

*Shoe throwing is considered a great insult in some parts of the Middle East and India.

*In Thailand, it is an extreme insult for the foot, socks, or shoes to touch someone's head or be placed over it.

*Runner's toe is an injury resulting from malfitting shoes.

*In literature and film, an empty shoe or a pair of shoes signifies death.

*The most popular shoe today is the sports shoe adapted for everyday use.

*A Sneakerhead is a person who owns multiple pairs of athletic shoes as a form of collection and fashion.

*Espadrilles, which are still worn today, were found as early as the 14th century.

*Types of shoes include:
-dress
-casual (for everyday wear)
-men's, women's, and unisex
-athletic (for physical activity/sports)
-dance
-work (designed to stand heavy wear, to protect the wearer, and provide high traction)
-orthopedic ("comfort" shoes are made with pedorthic and anatomically-correct comfort qualities, such as padded removable footbeds, wide toe boxes and arch support are made especially for those with problematic feet.)
-minimalist (minimal in design so that the advantages of walking/running barefoot are incorporated, yet without dropping additional protection of the foot from sharp objects).

*There are 9 parts to most shoes:
1. Insole: the interior bottom of a shoe, which sits directly beneath the foot under the footbed
2. Outsole: the layer in direct contact with the ground.
3. Midsole: the layer in between the outsole and the insole that is typically there for shock absorption.
4. Heel: The bottom rear part of a shoe.
5. Vamp, or Upper: Every shoe has an upper part that helps hold the shoe onto the foot.
6. Lateral: the outside part of the shoe
7. Medial: the inside facing part of the shoe
8. Welt: a strip of leather, rubber, or plastic that is stitched to the upper and insole of a shoe, as an attach-point for the sole.
9. Sole: the bottom of a shoe, the part that is intended to come in repeated contact with the ground.

Thanks to Wikipedia for all of the 100% true and accurate shoe information for this post (muahahaha!)

In this day and age, we are lucky that due to mass production, we can afford to be picky about what goes on our feet. Those of you who know me know that I wear flats like 99.9% of the time, but I love a good heel when the occasion calls for it. I wouldn't mind a pair of these: 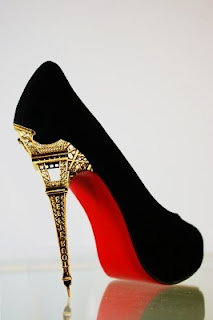