I had to delay making this post public, because it actually was a surprise for a very dear friend of mine, Rachel, who recently got married, and the project was a family tradition put together by her mother. It is such a cute and crafty idea that I just had to share.

The premise of the project is that the family members and friends of the bride and groom could make a square for the quilt in whatever fashion they wanted to. This could include a photograph, an embroidered picture, etc. Sue, the mother, created a private Facebook group in which people could post their ideas, their finished squares, and ask questions. Now, I have never embroidered anything in my life, and I was a little daunted by the task, but I really wanted to be a part, so I requested a square to be sent to me. I thought for a while about what I might like to put on the square. I had known Rachel for almost 10 years through our days volunteering as part of a youth leadership group through the National Hemophilia Foundation. In that time, we had come to be good friends--family even, through our unique situation of being affected with a bleeding disorder.

I am not really much of an artist, and didn't want to tackle something with intricate detail for a beginner. I picked out the picture I wanted--the couple Carl and Ellie, from the movie Up, in their younger years lying on a picnic blanket staring up into the sky. The note Ellie left Carl in their adventure book was, "Thanks for the adventure--now go have a new one--Love, Ellie." I thought that Rachel and Dave getting married and starting a new chapter, or "adventure" together was perfect. I sent the photo idea to Sue, and she transferred it onto the square and mailed it to me. The rest was up to me!

1. First, I placed the square in the hoop, and stretched it across pretty snugly and attached the outer ring to secure. I had to leave about 1/2 inch around all sides to allow it to be attached to the quilt itself. 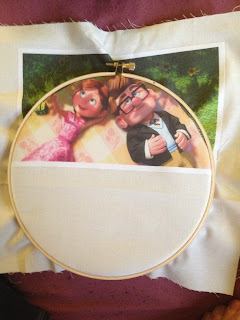 2. Next, I took a silver fabric pencil and lightly traced the message I wanted on the bottom half of the square. 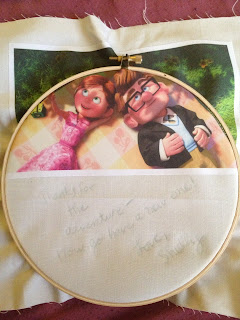 3. Now for the embroidery part! I was nervous. I YouTubed the stuff out of how to embroider, and Sue included some great tutorials for beginners in the Facebook group--everything from how to thread a needle to various stitches. I carefully stitched my message. It took about 4 hours total, and there were times I had to take out the thread, or start a new thread. Don't fret--and don't expect perfection on the first try! 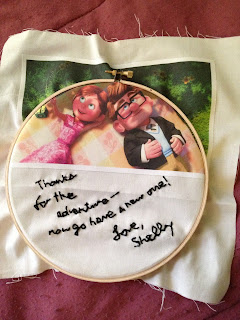 4. I removed the hoop, laid out the square, and admired my masterpiece. Not bad for a first try! Even if the handwriting is a little...kindergarten-y. 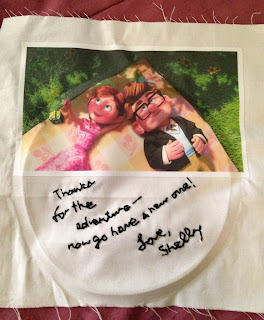 5. I mailed that bad boy back to Sue, and she took care of the rest! She added corners onto the photo to make it look like an old photograph. 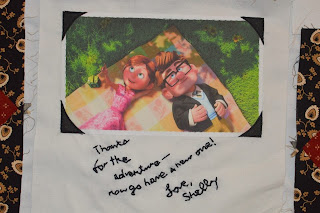 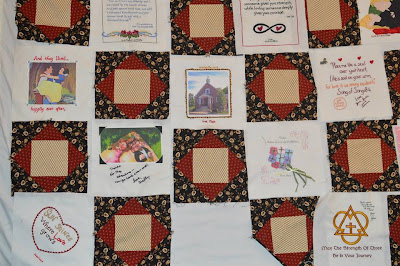 7. Here is the finished product: 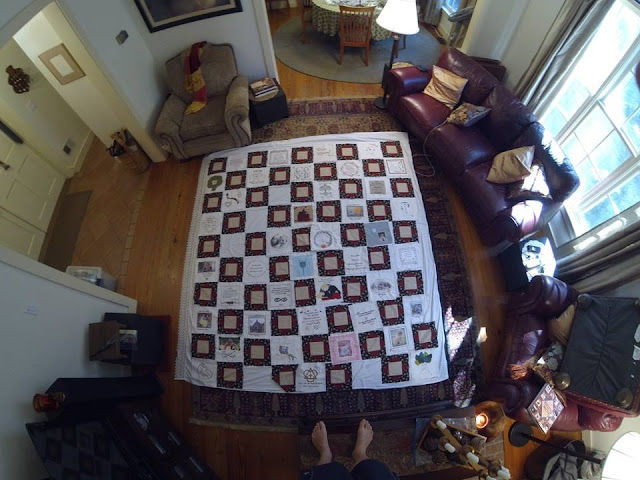 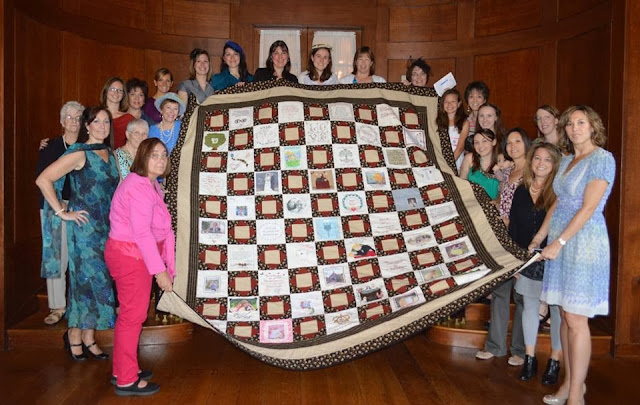 Also, the mother of the bride put together an album with pictures and the meaning behind each square, and who it was from! She used the same fabric from the quilt's design too. 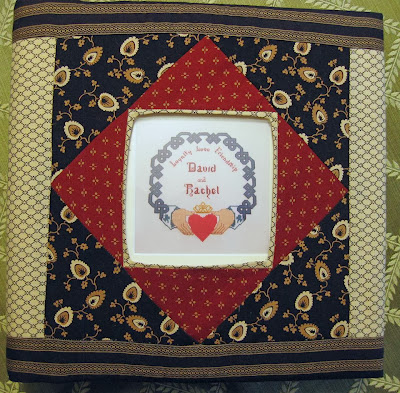 The bride and groom loved it! All in all, the quilt looks amazing, and the best part is that each square is made with creativity and love. I definitely want to do something like this for my wedding!
Posted by Shelly at 9:30 PM